I’ve decided to start a new series here: multihoster speed tests. It’ll be an occasional and random thing for now, but it’ll give you the opportunity to see which multihoster services are working with which filehosters, though on an admittedly limited scale.

Today’s test is with Depfile and a Linksnappy Elite account using jDownloader 2. Nothing really special with my setup, although it’s a little difficult to find Depfile download links. Eventually I’ll put together a guide on how to search for files from certain filehosters…

In any case, this test was done from the Midwestern USA, on a modern laptop and a 65Mbps internet connection. I found four working Depfile links around 100MB in size or larger, then added them to jDownloader. With Linksnappy, the downloads started right away. I know that on occasion with any multihoster I’ve noticed that with jDownloader, you sometimes run into a captcha error in that it says, ‘free downloads are not accepted’ or something similar, but this didn’t happen in this session.

You can see that the Linksnappy icon is the only active icon for jDownloader: 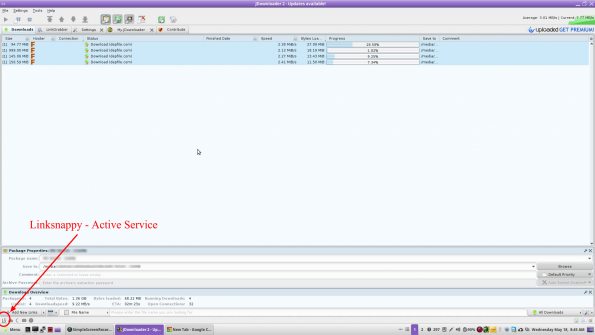 You are also able to see that the overall speed is in the 7MB/s-8MB/s range, which is the maximum my ISP offers with a good connection. 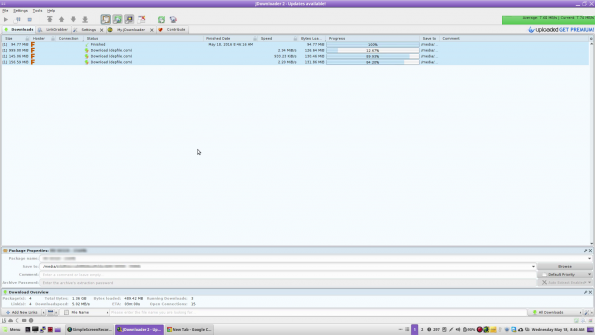 Most of the links downloaded within a couple of minutes or less, but they were also only 150MB in size or less. The last file, which was almost 1GB, downloaded consistently at almost 3MB/s until I stopped it. 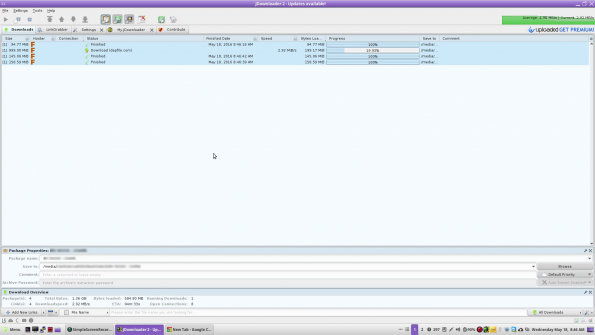 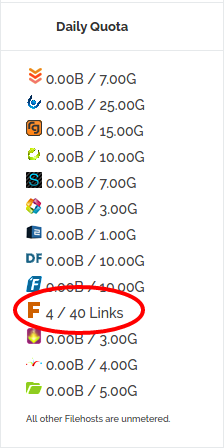 I believe Depfile has between a 10GB and 20GB daily limit for downloads for premium account members. 20GB sounds more reasonable, but I’m not 100% certain on this. Linksnappy, on the other hand, has a 40 file daily limit for Depfile downloads, as you can see in the image to the right. My downloads, which were between 97MB and 1,000MB, all counted as one file each.

A Depfile premium account for 30 days costs $20 USD, which is close to double the cost of the average multihoster service for 30 days, and a Linksnappy account costs around $11.70 USD for 30 days, with each getting cheaper if you buy longer membership packages. Which, if you only want Depfile support, buy a Depfile premium account. If you want to download as premium from Depfile and other hosters, then you should consider a Linksnappy Elite account.

It really looks like there’s a 3MB/s limit on Depfile downloads on a per-file basis. I don’t know if this is Linksnappy’s limitation or if it’s from Depfile, but either way it’s a very decent speed in my opinion. I know people in other parts of the world have much-faster internet access, but in the United States, the average download speed is less than 4MB/s (31Mbp/s), so 3MB/s is very decent for us and some other countries, too.

I’m quite pleased with Linksnappy’s torrent download tool (which I use fairly regularly), but their Depfile support as of this test worked equally as well. So if you’re in the market for a premium download service with Depfile support, I recommend that you check out Linksnappy.

Slow vs Fast Downloads: Why It Happens