Best I can figure, I’ve been using or testing LinkSnappy’s services since mid-2014. That’s at least 3 1/2 years of experience I have with this service. Normally, proper reviews take 20+ hours to complete: setup, getting live links to download, recording the download sessions, editing videos and then the writing of the actual review. In this case, I’m hoping to cut out some of that time since my review from 2014 still holds true, at least where it counts most: it’s a good, solid service.

I use jDownloader to download from filehosting sites, and I use the torrent download tool’s interface on their website to download torrents. With jDownloader, I’m using their custom jDownloader plugin which they posted on their Facebook page. This was released just three days ago (February 7th, 2018). It helps solve some of the issues when using the default LinkSnappy plugin through jDownloader. I set jDownloader up for 5 consecutive downloads with up to 8 threads per download.

My internet speed is quite fast, but also quite unstable. I’m supposed to have 200Mbps, but it’s not uncommon for me to see up to 700Mbps. However, whenever I download files, I use a VPN through Private Internet Access (PIA). I just use whatever VPN server can support over 100Mbps at the time. You can download from LinkSnappy just fine using a VPN — I’ve never had any problems with it.

For this review, I tested several different filehosting sites:

My intention was to get two files from each of the listed filehosters, but ended up with one Filesmonster and three Uploaded files. The testing session had 7.6GB of downloads, and I was able to download 7.38GB worth of data during the test. Here’s a video of that download session:

Surprisingly, LinkSnappy does support Nitroflare, albeit experimentally. The only reference to Nitroflare is on the download page listed under ‘Experimental Filehosts’; it’s not listed on the hoster status page.

During this test, I saw speeds up to 24MB/s in parallel, with some individual links going to 14MB/s or maybe a tad higher. Given that my speeds were limited to 100Mbs-150Mbs due to the VPN, I think it’s likely that people with even faster internet connections would see higher speeds than these.

I had one problem while downloading files. One of the files from Openload didn’t download. I even tried resetting it to start again, but for whatever reason it didn’t start. It doesn’t bother me one lick due to the purposes of my downloads that day, but the other file for Openload downloaded just fine, so I don’t think it was a problem with LinkSnappy’s support for that particular filehoster.

Overall, speeds were quite good. If you take a look at the above video toward the end (around 2:44), you can see that all the files downloaded within about 1 to 6 minutes each. File sizes ranged from around 200MB to over 1GB. LinkSnappy has limits on some of the filehosting sites they support. Personally, I’m not a big fan of the 5GB daily limits for certain hosters (Keep2Share, FileJoker, Alfafile) but 10GB-30GB for the likes of Rockfile, Depfile and Rapidgator are great. Uploaded.net (ul.to) being unlimited now (as per their Facebook page) is great, too.

I’ve not seen any problems like I saw in the last Linkifier test where downloads were overcharged (Linkifier fixed that), and the daily download limits reset like clockwork (literally), which you can track on the download page, as shown to the right.

There has to be some give and take with premium account support and multihoster services like LinkSnappy. Or any of the others, for that matter. The tradeoff for some of the lower daily limits is that LinkSnappy is and has been, in my experience, very reliable and stable and gives you access to a large number of useful filehosting sites. Most or all multihosters have some limits, just not all of those services make it as clear.

On January 31st I published a review for LinkSnappy’s torrent downloader. You can read that if the tool potentially interests you, but the summary is that it works quite well, and is very fast when you have a torrent with a good seeder:leecher ratio.

On LinkSnappy’s official Facebook page, they have other user reviews. Now, I’d expect that there’s some kind of moderation going on with reviews that are submitted, but I can see that they leave the bad review there with the good, which is always nice when a service allows itself to be publicly criticized. 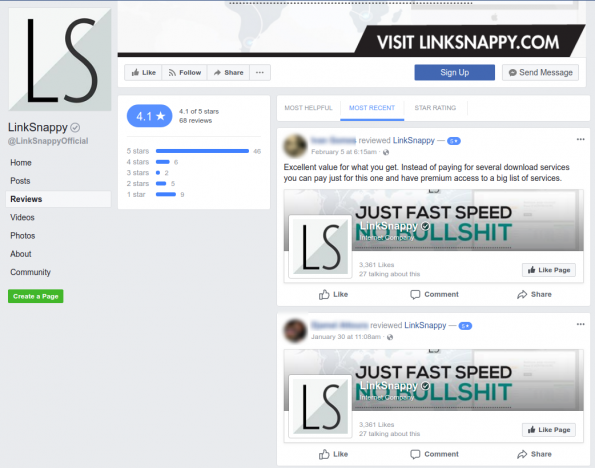 I’ve used services in the past that seemed to remove negative feedback about their services, which I don’t personally like at all. When a company deals with bad feedback or reviews rather than tries to hide it, I think it gives that company a lot of credibility.

I’m quite happy with LinkSnappy’s service. I have been for going on 4 years now. At the end of the day, they do a really good job working to keep supporting the sites they list as supported. They may not support 100+ sites, and there are some download limits with some filehosting sites, but the service has been very stable and reliable overall. Amongst the best or the best of any multihoster service I’ve tested — certainly the best when you look at the long-term view.