LinkSnappy is a popular premium multihoster service that started in 2010 and supports downloading from 60+ sites. I’ve been using the service as a premium account member, which they call “Elite” accounts, for a couple of months for testing purposes to create this review of Linksnappy’s service.

My assesment and review of Linksnappy.com is based on my personal downloading habits. So, I’ll share a little about that as this type of download activity and frequency is what most of this review is based on.

I do not download a lot of files at a time. I generally only download video files and since I subscribe to a few pay-per-view-type video sites plus watch videos on Crackle.com, Youtube and various network websites (ABC, NBC, FOX, USA, etc), my downloading needs are very small. For testing purposes (to do these multihoster reviews, for instance) I’ll download files I don’t want or need just to get a better feel for how the service works.

Probably my average download “session”, if you will, is between 1.5GB and 3GB. I rarely, if ever, download more than 4-5GB at a time or in a day for that matter. So, I’m not a heavy downloader or even a frequent downloader. But, I still did some heavier-than-usual downloading to test the service and write this review.

Because this is a long review and a semi-comprehensive overview of all the things I could think of that might be worth mentioning in a review of Linksnappy, the sections can be navigated to easily from here. 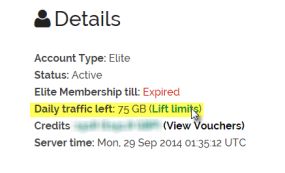 The number of files you can download using Linksnappy, or the bandwidth you can use on a daily basis, is largely unlimited. I say largely as there are some limits. Two types of limitations exist. First, if you’re just setting up a new account, you have a 75GB daily limit. Which, to me, that’s absurdly high. But, I don’t download a lot of files. In a download session, I might download 3GB or maybe 5GB, but never more and usually less. However, aside from buying a 7-day account or at the discretion of Linksnappy, that 75GB daily limitation can be lifted simply by requesting the limits be removed. 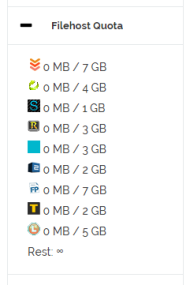 There is another type of download limit you’ll find with a Linksnappy account. It’s called the “Filehost Quota” and can be found on the download page from withing your Linksnappy account. Certain filehosting sites have limits. I believe these are daily limits, but I will seek clarification. Very few of Linksnappy’s supported hosters have limitations. As of this review, there are 9 filehosters with limits ranging from 1GB to 7GB. Unfortunately, you can’t tell which filehosting sites they are unless you know what their favicon looks like… hovering over the icon next to the traffic limitation number does not display the filehosting site’s name.

Overall, though, the bandwidth allotted for their premium / elite accounts is generous. In the USA, I think a large chunk of us have either soft or hard monthly bandwidth limits on the amount of data we can transfer, I know that some Canadian ISPs have low hard limits as well as some Eastern ISPs (Australia comes to mind) – for a lot of people, they will not have to worry about going over 75GB in one day. For those that might, more bandwidth is included free with your 30, 90 or 180-day account on request.

Unlike most multihoster services, Linksnappy’s pricing is in British Pounds (GBP) versus Euros (EUR) or Dollars (USD). However, when you consider the exchange rate, Linksnappy is priced in line with most every other major multihost / debrid-type provider: £7.99 for 30 days is about €10.23 or $12.98, which is basically other multihosters charge for 30 days of service: around $13.50 USD or €10 EUR.

Linksnappy offers per-term-type membership options: 7 days, 30 days, 90 days and 180 days. The latter two Elite membership packages include 30 and 90-day vouchers, respectively, so that potentially makes the 90 and 180-day accounts an exceptional buy. However, I do question just how those accounts can be used, which I will get into below.

Download speeds using Linksnappy are overall good. I consistently get 3-5MB/s while downloading a few files in parallel, which I peak at about 8MB/s. I intended to make a video of downloading some files using jDownloader with Linksnappy and forgot to hit the record button, but here’s a short part of a download session:

You can see the peak downloads at 8MB/s in both the small windows (using DU Meter). I’m perfectly content with Linksnappy’s download speeds, but speeds can vary wildly depending on multiple factors. Here’s a page that outlines variables that affect download speeds.

Linksnappy’s support is pretty good. They use a helpdesk or ticket-type system, and at least during the weekdays, they seem to respond within 24 hours. I’m not sure about the weekends as I haven’t contacted them on a Saturday or Sunday that I can remember.

The support has been helpful this far, too. I hate it when you have a support issue and the support staff supplies some vague, non-answer to your question. This has not happened with Linksnappy.

Linksnappy seems quite quick to look into and fix filehosters that are down or not working for whatever reason. There are some reasons listed here. Here’s a recent example from their Facebook feed: 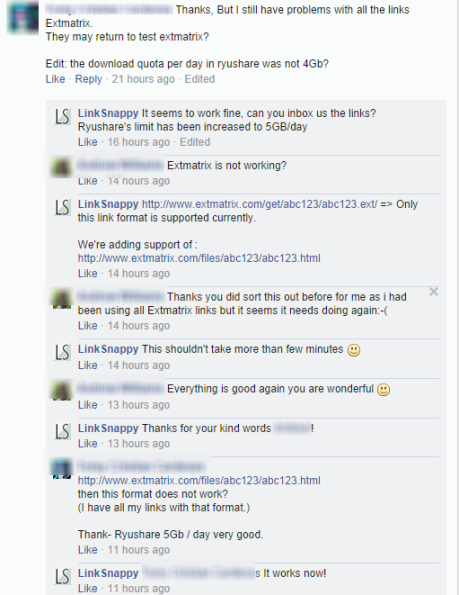 This isn’t to say that some filehosters aren’t down for extended periods of time (again, refer to the above link for reasonings), but that, overall, Linksnappy is very responsive and attempts to get the broken filehosting site downloads working quickly when they’re discovered and reported.

Back in early August (2014), Linksnappy stated they were adding torrent support to their Elite memberships later in the month. However, that has not come to pass yet. The other day they posted an update stating that they ran into some issues with the 15GB free storage option that came with the torrent download support and we would get an ETA on this feature’s arrival in the near future. The delay of this was and is a disappointment, though aside for the sake of this review it doesn’t affect my view of Linksnappy as I personally don’t use torrents very often at all. I just don’t need to because direct downloads work great. But, I wish I had the option to review this, but will either append this review or talk about how well it works or doesn’t work in another Linksnappy review.

While I defaulted to using jDownloader with Linksnappy, which worked great, I did try out the browser plugins (LSE Extensions) for Chrome and Firefox. There was a bit of fiddling around I had to do because I use a right-click-type script for both of those browsers (Rightlinks and Rightlink), and the “Download with Linksnappy” option is in the right-click context menu, but aside from that, the browser download extensions work well. You right click on the download page link, choose to open the page with Linksnappy and the file downloads in the background (Chrome) or offers you whatever options (save location, open with) in Firefox.

I think the browser download option is best-suited for occasional, once-off downloads of smaller files. If you’re going to download a bunch of files or a large file, I’d recommend using a download manager like jDownloader.

Overall, I think Linksnappy is great. Fantastic even. So far, their support has always been helpful, pleasant and kind, their listed hosters work as advertised (obviously, things can go down at anytime, though), the download speeds are good and they give you the option of nearly unlimited downloads from a large majority of the premium account filehosting sites they support. Honesty, aside from the slight disappointment from the delay of the torrent downloads, I don’t have anything negative to say about Linksnappy at this time. I can’t say they are rock solid 100% of the time, but no multihoster service can be just due to they way premium multihoster accounts work. Still, they really appear to try hard to keep their service up and running and useful for their members. This is a real bonus in my book.

I highly recommend Linksnappy. They have a lot of positive feedback online to boot, and they are certainly a service I will continue to use as I need multihoster services to download files throughout the year.