I’ve finally been able to take a few moments to put together a short review for the LinkSnappy torrent downloader tool. Their name for it is a cloud-based torrent client, which is a more modern description of it. Either way, this tool allows you to take a .torrent file or magnet link and use a third-party site to direct-download those files to your computer or local storage device. Essentially an anonymization tool for torrent / magnet downloads.

You can see a video of the tool and interface with this Youtube video.

When downloading files to my computer using this torrent downloader, I use Chrome plus the Chrono download manager. I believe it does speed things up over the default Chrome download protocol. This download manager should work in any Chromium-based browser and Opera as well. My internet download speed ranges from 150Mbps-700Mbps, usually somewhere in the middle, and while it’s not overly stable speed-wise, it’s much faster than the US average, so pretty decent for testing download speed capabilities.

I found a torrent-indexing site and grabbed a small handfull of magnet links that showed seeders and leechers. There was no rhyme or reason to the selection, which is probably why I had the results I encountered for this test.

This is where things really shine. Downloads were quite fast. While the time a torrent takes to download is affected by much more than simply the available bandwidth of the downloading party (individual or server), I saw speeds over 30MB/s, which I believe is around 250Mbps with this download session: 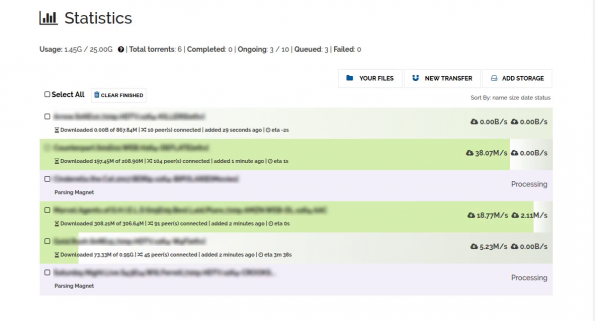 This isn’t uncommon. Multi-gig files can download within a few minutes with the optimal leecher:seeder ratios. I probably use the torrent downloader a few times per month, and without exception the torrent-download side is fast for the files I’m able to download.

Most surprising to me were the http downloads from LinkSnappy to my local machine. With my old ISP, I rarely saw over 4MB/s with parallel downloads, but this time around I saw upwards of 14MB/s downloading from LinkSnappy’s servers: 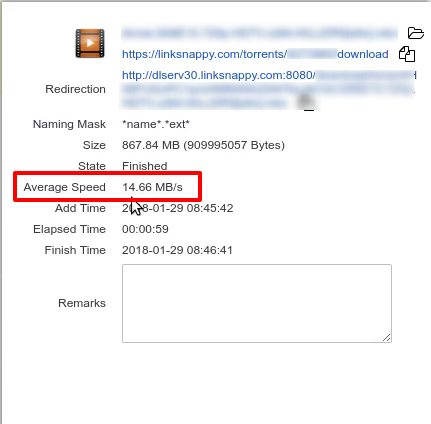 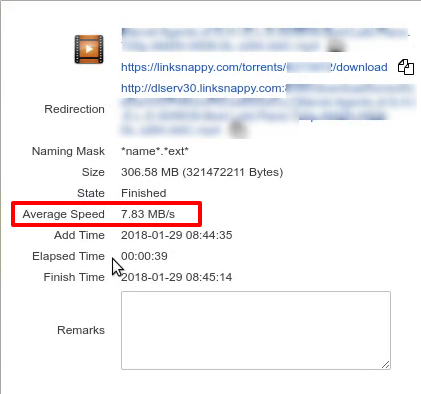 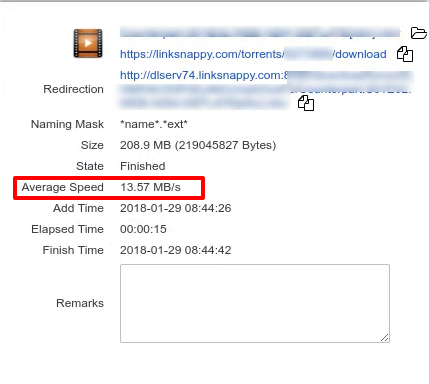 This is the first time I’ve really paid attention to download speeds since getting my new internet connection. In the past I’ve seen slow downloads from LinkSnappy’s servers. However, I did not take the time to eliminate my ISP or network path as the cause of the slow downloads. They employ multiple download servers to handle the load from members, and it’s certainly possible that certain servers may have an issue at one time or another. However, with my semi-regular usage of LinkSnappy, I don’t see this as being a problem.

Normally I like to publish a video alongside my reviews, but in this case things just downloaded too quickly for me to get anything useful. Which, that’s certainly not a bad thing for people who use the service.

Unlike with my last review a few years back, this time I used magnet links versus torrent files. I remember it being somewhat difficult back then to get .torrent files, and magnet links are just so much easier. Right-click, copy link, paste it into LinkSnappy’s website or a text editor, press a button, and that’s about it.

Once they parse through the magnet links, you press a ‘Start’ button, and downloads usually start within a minute.

For this test, I ran into problems with two files. In the past, I’ve run into problems with a couple of files for different reasons, but with the same result. What happens is the files get stuck in processing, but don’t give you the ability to start the downloads, like so:

When I encountered it in the past, I believe it was because there weren’t enough or any seeders available. The files I had it happen on had very few seeders listed as available. For this test, my guess is either these specific files were flagged by some media company (like a DMCA notice sent somewhere) or they were labeled as fakes as determined by some protocol or service LinkSnappy uses, and thus not allowed to start. Looking at the file names, which I will not share… I don’t know which would be more likely, even if either of my speculations are remotely close to the truth. I don’t download recent Hollywood movies or even TV shows much or at all (Netflix, Amazon Prime and online rentals — so easy and cheap), so I’m not likely to run into this problem, however it may be more prominent for people with different downloading habits.

I’m just speculating here — you’d need to contact LinkSnappy if you run into this problem regularly.

LinkSnappy has two places to receive support: through their website, and then possibly via their Facebook page. At least they allow comments on Facebook, but I probably wouldn’t rely on that for actual support, only to report an issue if you had one that was time sensitive. I’ve emailed support several times over the past several years I’ve used them, and the average response time via email is 2-3 days. Sometimes it takes longer, but most of my contacts were not service-problem related, so that could factor in to my additional delays due to priorities.

I’ve used this torrent downloader for years, and maintain a regular Elite account. Downloads are generally fast, and the torrent downloader seems to continually work really well. The 25GB torrent storage isn’t well-suited for regular torrent downloaders, but for people who’d like to download a torrents occasionally and quickly, possibly avoiding problems with their ISP — it’s a great option. They do have torrent storage addon packages available, but you’d need to signup to see them. But, 100GB extra storage is $4.99 per month. They have bigger addon packages as well.

For me, the important thing to convey is that this tool is just an extra with LinkSnappy’s service, but it’s a big part of why I maintain my membership there. Direct downloads are fantastic, but they’ll be touched on in an upcoming review. If you haven’t yet, I highly recommend that you check out LinkSnappy. There’s a reason that their latest renewal promo sold out so quickly — people have no problem renewing their accounts again and again because the service is quite solid.