Earlier this month, a part of the US government voted to reverse Net Neutrality rules. The idea behind Net Neutrality is pretty simple: internet service providers (ISPs) had to treat all data the same across their networks. They weren’t allowed to purposefully throttle certain sites, services or protocols, and they couldn’t give priority to certain services, sites or protocols over others. All data treated the same. These rules were set into place / hardened with a 2015 ruling.

There are many, many, many, many, many, many, many, many (I could go on…) examples of ISPs throttling, blocking or prioritizing data flows for various reasons, regardless of whether Net Neutrality rules were in effect or not. Large ISPs have so much money, and therefore so much power, that buying people and paying fines for breaking the rules or the law runs somewhere between just another business expense and a worthwhile investment to increase profits. Then, when you can get the laws changed to legally discriminate, well, that’s an even better deal for their side.

While that may be a little harsh and maybe not reflective of any ISP’s actual modus operandi, the salient point should be that I am not in favor of the repeal of Net Neutrality rules.

Primarily affects the US… for now

For the time being, this appears that it’ll mostly affect internet end-users in the United States. Well, those users and users of smaller ISPs who purchase bandwidth from companies that use might network management for financial gain to the detriment of the end user. Roughly 1 in 3 of today’s internet users in the USA directly subscribe to one of 10 companies based on statistics from 2016-2017 [ 1 ]. That’s potentially many millions of people who can be affected by a single ISP’s untoward network management decisions.

The effect on the rest of the world is hypothetical, even if the current rulings in the US were set in stone indefinitely, which they are not. However, as mentioned in this article, there are potentials for worldwide effects that may take time to reverberate and trickle down to international internet users. Regardless of any lack of tangible, immediate effects for non-US internet users, the US adopting these policies of allowing private corporations to self-regulate a service that is considered a basic human right is dangerous. Certainly ISPs arbitrarily cutting off access to end users probably far-fetched, but the net without neutrality will likely reshape how things work online, and that gradual acceptance of the status quo can easily start popping up elsewhere as attitudes change toward what is acceptable and what is not.

For examples of why we shouldn’t trust large utilities to self-regulate and not screw over the end user in the name of increasing profits, see the second paragraph here. Or, look at history.

Dangers of the ‘net without neutrality

Thankfully, which is a semi-sick way of looking at it, some ISPs have already given us a glimpse of what deregulated internet service looks like. ISPs Throttling bittorrent, forcing services to pay for better access to end users, blocking competing services, favoring own services over competing services and several more examples. I’ve captured a screenshot in case that last link disappears: 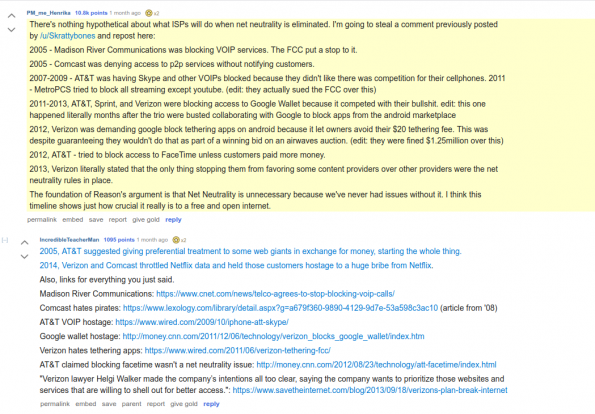 Corporations have an interest in maintaining and increasing profitability. They are likely legally required to do so. I don’t see how we should expect that, when given more control and freedom, ISPs won’t be self-serving up to the extent that it causes them to lose subscribers. It’s not like we can all just pick another ISP, as we still have very few choices in the United States when it comes to high-speed internet access, let alone the people in small communities and rural areas without access to a single “broadband” (25Mbps/4Mbps) service provider.

For these reasons, we should expect more of the same, except it’ll become more visible to the general public. This won’t all come to the forefront immediately, but gradually. We’ll become more accustomed to ISPs not upgrading their networks so they can maximize profits while offering priority access for more money, hard data caps may become more common, even in populated areas where insane amounts of bandwidth is readily available. Data coming from competing companies may not be throttled technically, but when coupled with the lack of network upgrades and prioritized access for their own services, it’ll have the same effect. This is all hypothetical, but not far-fetched.

Really, the easiest way to bypass ISP throttling or other tomfoolery is by using a VPN. I’ve been using Private Internet Access for well over a year now, but there are plenty of others out there. Using a VPN, you’re essentially hiding the details of what you’re doing online from your ISP by routing your internet traffic through an encrypted tunnel / private network that runs from your device to servers elsewhere. Your ISP can see you’re passing traffic, but since they have no idea what you’re doing, any throttling (or blocking) taking place for certain websites, ports or services has no effect on your traffic flow. A VPN can help bypass video-streaming throttling, torrent throttling or even blocks on specific websites.

Multihoster services aren’t intentionally designed to help protect against ISP throttling, but in some cases they could provide this benefit. I use and recommend LinkSnappy, but there are more.

Taking my liberties with hypothetical situations further, it’s plausible that anti-piracy organizations could work to take advantage of loosened ISP regulations and get their help in throttling or even identifying more than just bittorrent usage, but downloads from filelockers or online video streaming websites of questionable legality as well. Popular filelockers (cyberlockers, filehosting sites, etc — same thing for these purposes) are easily identifiable, and it’s easy for a network engineer to manipulate traffic to or from a specific destination on the internet. Multihoster services, being substantially more obscure than the filehosting sites they offer access to, could easily fly under the radar even if filehosting sites become bigger targets than they already are.

Multihosters are like a proxy for filehoster downloads, and some of them even offer torrent downloads. If you download a lot of files, it’s a built-in layer of privacy protection plus offers some possible future proofing for effects of repealing Net Neutrality rules.

The state of the internet for 2018

Even as I’m poised to pick up faster internet (250Mbps) from a small, local provider, which is exciting, I’m less than optimistic about the well-being of an open, fast internet as I’d previously experienced and envisioned. I’ve gained a lot of advantages due to how the internet has worked over since I started using it some 15 years ago, and while I don’t remotely expect that “the internet” will suddenly become this dark, limited place that is only available to the rich, it appears to be fundamentally changing for the worse. The evolution of the decisions this month is what really concerns me, and what the state of the internet will be for my children, grandchildren and their children.

Outside of maybe some increased fees, changes to data caps and silent slowdowns of various things, I don’t expect much to change in 2018 due to the repeal of Net Neutrality rules. However, that’s how they get you. Like the parable of the frog in a pan of water, we might not realize what’s happening until it’s too late.

[ 1 ] “…based on statistics from 2016-2017” 287 million internet users, top US broadband providers, indeterminate if this reflects broadband definition changes