While I’ve defaulted to using Private Internet Access for my VPN needs for years, I also occasionally use a different VPN provider: Mullvad. I’ve been using VPNs for well over a decade and only stumbled on this service sometime in 2019, so I wanted to bring some more attention to the service.

The reason I flip back and forth sometimes is primarily due to some weird problem using jDownloader. Sometimes when using Private Internet Access, jDownloader will tell me I have no internet access despite that not being the case. So, I can’t discover files, download files or even update the software. In these times or when I want to mix things up some, I’ll setup or renew a Mullvad account.

That I’m aware of, Mullvad is unique in that you don’t need any personal information to setup a VPN account. Rather, your user account is based on a string of 16 numbers that you can generate from the website. That’s it. No email address, no name, nothing. Beyond that, they not only accept bitcoin payments, but they also accept cash. 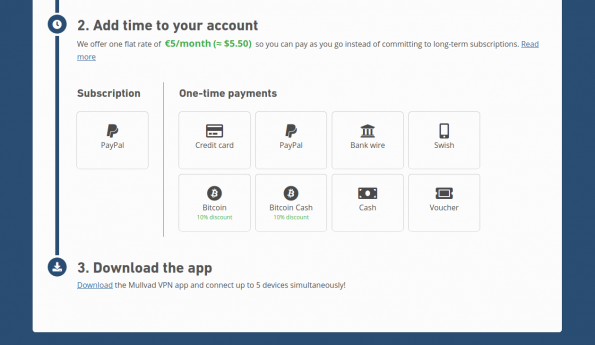 Accepting cash payments is no insignificant matter, especially for a small company with a worldwide audience. It adds overhead that wouldn’t exist if only relying on digital, computer-based payments. To me, this leads me to believe the company is pretty serious about user privacy.

Another thing is their no logging policy. It goes into detail that I might add if I were developing something to maintain user privacy while sharing specifics of the implementation. It doesn’t simply state the no-effort tagline, “No logging. Period.” without further explanation of their no-logging protocols.

Further, they are presently the recommended VPN provider over at privacytools.io. Which, this is how I even found out about them, working to tighten up Firefox security as I wean myself off using Chrome for everything.

Though this isn’t really a Mullvad review, it’s more of a post so that others know the service exists, I’ve found the speeds normally are fine. I believe I’ve encountered some slowness in the past, but it hasn’t been recent. In fact, I’ve tested the speeds when using Mullvad along with multihost download tests, and in every case in the past couple of months, I’ve seen the same speed I expect from my ISP without a VPN.

I use US-based locations for download testing, but I’ve used international servers without issues.

I can’t speak to support as I’ve never contacted support.

So, again, this isn’t meant to a Mullvad review, and there are plenty out there, but if you’re in the market for a VPN service, I recommend that you check out Mullvad.