I’ve noticed not too long ago that Zevera and Premiumize.me had the same basic backend setup. Same menu layout, many of the same menu options and listed features. Here are some screenshots from their current member’s area / features pages:

Earlier this month you could actually click a link on the hosters/services page to see a list of filehosting and video streaming services Zevera and Premiumize supported. Here’s a screenshot from Premiumze as of May 10th, 2020: Here’s a screenshot from Zevera on May 10th: 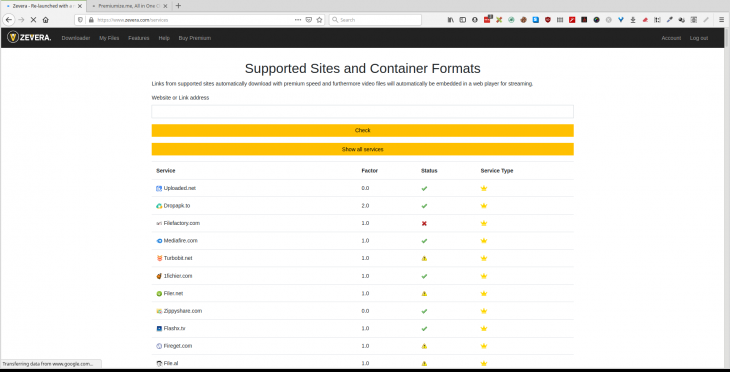 However, today when I was looking at Premiumize for something, I noticed that I could no longer see a list of filehosting / video streaming services that they support downloading from. The list of supported sites is also missing from Zevera.

Further, I noticed that Zevera has a message on their frontpage that “ZeveraHost is now Zevera”:

Which, it appears Zeverahost is some kind of cloud-storage service also promoting HostGator, which was a stellar web-hosting company back in the mid-2000s, but fell to crap after being purchased by EIG in the past decade. I was a HostGator customer for about a decade. That’s beside the point, but wanted to get those digs in. I have no idea when that message was added to Zevera’s home page other than it was after January 4th, 2020 as that’s the last capture by the ever-useful Wayback Machine.

Earlier this month I thought that maybe whomever purchased Zevera in 2018 just bought a script / template from Premiumize or maybe even just hired their coders. However, given the continuing changes and similarities, it almost looks like they could be owned or controlled by the same company, at least on some level.

While that’s interesting, it’s not my main point. The main point is that these two services: Zevera and Premiumize, recently (early May 2020) listed filehosting sites and video streaming sites that you could download from using their services. Now they do not. Not that I can see, anyway.

I don’t know if this is a redesign, if these two services will cease to be filehosters / debrids / premium link generators, or they just don’t want to advertise that fact anymore. Which, if they’re still allowing members to download from filehosters and video-sharing sites, it’s pretty unique to not allow people to see which hosters they support before purchasing services.

I’m not claiming any scandals here, but it’s interesting as it appears these services may be shifting how they operate. Which, the feature list is pretty big so I’m sure the services could be useful to some people, though based on what I see today, they really don’t fall into the category of being “multihosters” anymore, as this site describes them, anyway.

If there’s more news or info, I’ll post it here when noticed. If anyone has more information on what may be going on, feel free to leave a comment.